Earlier this week Instagram launched Reels, a 15-second video feature that is being described as the Facebook-owned company’s answer to TikTok. Dev Sethi, Instagram’s head of sports, explains how leagues, teams and athletes can take advantage of the format.

First there was Stories, then came Live, which was followed by IGTV. Now, there is Reels.

This week saw social media giant Instagram officially launch its new short-form content format in more than 50 countries – the US, India, Brazil and UK among them -  having tested the format in several markets for over a year. Sitting within the main Instagram app, Reels allows users to tap into a whole suite of editing tools to create and share 15-second videos with augmented reality (AR) effects and overlaid audio backing tracks.

At this point you might already be thinking of one thing: TikTok. ByteDance's short-form video platform has shot to prominence since being made available in international markets after its initial launch in China in 2016, reaching a younger demographic that sports and companies in other industries around the world are desperate to connect with.

Kevin Mayer, the TikTok chief executive who joined the company from Disney earlier this year, has welcomed the competition from Reels, even labelling the service as a ‘copycat product’ in a recent blog post. But while the similarities might be obvious, Dev Sethi, Instagram’s head of sports, tells SportsPro there are “substantial differences” between the two.

“First and foremost, TikTok is 60 seconds worth of content, Reels is launching as a 15-second format,” he notes. “I think the through-lines between Instagram, TikTok, Snap, and really even Instagram with Stories, has been that there is this appetite for people to not only consume, but create these short-form chunks of content. 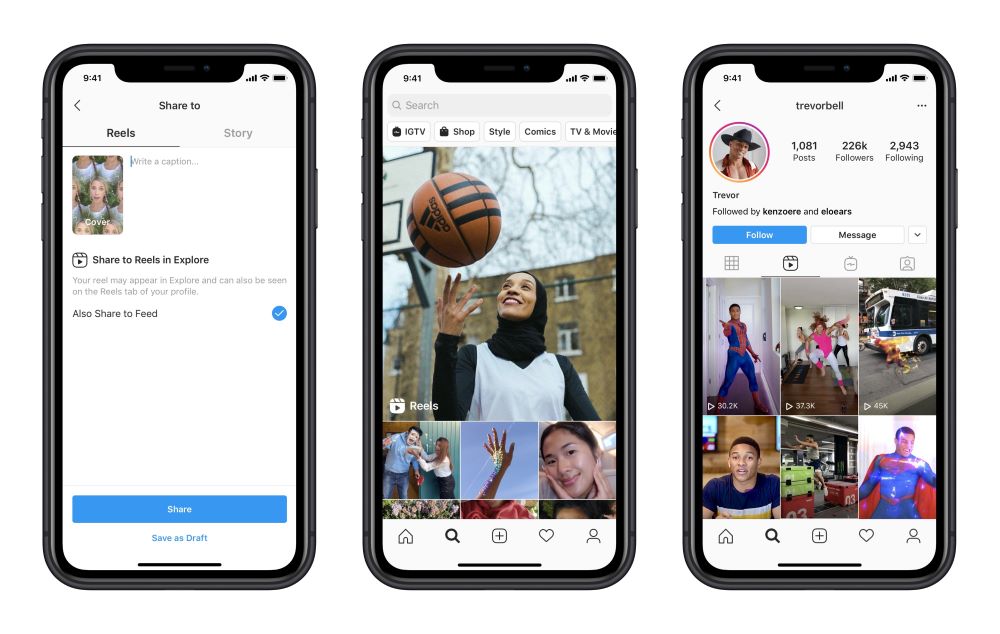 “While I think TikTok has also identified some of those preferences of young people and how they create and consume, that’s something that Instagram has really keenly observed and heard from the community on our platforms as well.

“So, as we’ve seen the rise of short-form video on Instagram, we thought there was an opportunity to create something that really fit the needs of young people, and also creators within sports who aren’t just defined by creating mid-form content, long-form content, but can be really expressive and creative in creating short-form content.”

Instagram might be keen to play down the links between TikTok and Reels, but it is likely no coincidence that the Facebook-owned company has chosen now to launch a rival offering. President Donald Trump, who has claimed that TikTok is feeding data directly to the Chinese government, has now issued executive orders that would essentially ban the ByteDance app and Tencent-owned WeChat from operating in the US in 45 days if the platforms are not sold by their parent companies. TikTok’s future in that particular market may be murky – Microsoft has been in talks to buy the company’s US arm – but Instagram’s launch of Reels makes clear that short-form content is a space in which it doesn’t want to lose any ground.

The question for sport remains how it can take advantage. The past year has seen no shortage of blue-chip teams and leagues launch on TikTok, not necessarily because they have a detailed strategy for the app, but perhaps more in acknowledgement of the need to be where their future fans are convening. TikTok, which crossed two billion downloads in April, boasts a reported 100 million users in the US alone and a total 800 million globally, many of whom are teens and young adults - an audience that Instagram has also traditionally been successful at building.

For its part, Instagram says users will be able to share their public Reels to Stories and have them discovered in a new dedicated space in Explore, which showcases content that is trending on the platform. Monetisation opportunities will inevitably follow, but for now the big opportunity for sport would appear to be in audience engagement.

“It’s another unique, creative way for those constituents within sports – whether they’re athletes, teams, leagues or media – in creating entertaining short-form content that can reach potential fans and unconnected fans, maybe Instagam users who aren’t aware or haven’t consumed much content from those sports partners” Sethi explains.

As we’ve seen the rise of short-form video on Instagram, we thought there was an opportunity to create something that really fit the needs of young people.

“One of the unique value propositions of Reels is that users can gain inspiration and creativity from what our sports partners are creating, and even mimic that content as well. So really having the through-line of fans being entertained, and then prospective fans discovering new brands, and then even participating and becoming creators themselves.

“For us and for Reels, it’s a place where you can participate in the timely and relevant cultural moments that are happening on Instagram and that are unique to Instagram as well. Culture is being made on our platform, and this is another great way for those moments, those trends, those fads to emerge on a service like Reels, and have our sports partners participate in them, as well as setting them.”

Some sports have already been trying their hand at Reels since it went live on 5th August in an early attempt to understand what is going to perform best. The National Basketball Association (NBA) went down a slightly more conventional route, sharing a game recap from the opening night of its return in Orlando. The Miami Heat, one of the NBA's teams, created a post showcasing life inside the league's Disney bubble. Newly-crowned Premier League soccer champions Liverpool, meanwhile, posted a clip from a video promoting their new kit deal, opening up the age old debate over whether the name of their technical partner is in fact pronounced ‘Nike’ or ‘Nikey’.

How do you pronounce @nike? ���� #LFC #LiverpoolFC #NikeFootball #Nike #TellUsNever

Sethi says Reels does not discriminate against any type of content, but believes it is those sports partners that capture the trends of the moment in a short window that will see their clips go viral.

“I do think our partners are used to creating bite-sized content on our platform,” he begins, “especially with Stories not only being 15 seconds, but also ephemeral content. So that muscle memory I believe is already there, but this just gives them more power to express themselves.

“Also, given that we believe young people are going to really embrace this format, we think it’s an opportunity for them to be more creative and not necessarily think about content that needs to fit all the various services of Instagram, because in reality the definition of what people are creating for Instagram, the definition of a brand or creator has evolved as well.

One of the unique value propositions of Reels is that users can gain inspiration and creativity from what our sports partners are creating, and even mimic that content as well.

“We’ve already seen in our test markets our partners have created a diverse slate of content for Reels that isn’t just repurposing highlights that are cut down to 15 seconds - it can be teams that have created really athlete-centric content, showing the personality behind their brands, but in really fun, creative ways.”

Game Day in the Bubble. �� #WholeNewGame

Indeed, the biggest beneficiaries of Reels could be the athletes themselves. The coronavirus lockdown demonstrated the value of sportsmen and women as content creators, with many of them spending more time on social media to engage with their fans in the absence of live events.

Perhaps perceived of as a place where people go to flaunt the best, maybe even an artificial form of themselves, Instagram now offers in Reels a format Sethi believes will allow athletes to showcase their true personalities.

“I would argue that we really first started to see the rise and proliferation of athletes as creators through our Stories service,” he states, “because it gave them a comfortability in creating content that didn’t have to be over a minute long and super well produced – it could be really engaging, authentic, even raw at times. It gave them that comfortability to express themselves in a way that didn’t feel like they had to be full-time creators with a full-time production team.

That muscle memory I believe is already there, but this just gives them more power to express themselves.

“Reels to me is the next iteration of how athletes can express themselves. If you take that concept overall and apply the new diverse and creative tools that we’ll have in Reels, then you’ve got a really nice match in that next evolution of how athletes are able to express themselves and create on our platform, in ways that feel really native to how they’ve used Instagram as well.

“So having all that within the camera, being able to mess around with different effects, I think that’s really going to inspire athletes to try different things and really embrace what it means to be a creator on Instagram.”

Catch up on the NBA Restart opening night win by the @lakers!

For Instagram, Reels could be the final piece of the puzzle. The social media platform can now pitch itself to sports partners as a one-stop shop for them to broadcast live, post mid to long-form content and share short-form video. Sethi certainly believes it to be a complete offering that has made Instagram a “necessary place” for sports to be present and visible.

“We now have a holistic series of services where brands can express themselves,” he says, “and then now that next evolution with Reels where you can be a bit more creative in what you create, and then even more diverse in who you can potentially reach.

“I think it’s given all of our sports partners a litany of tools and opportunities to present their brand in very unique and diverse ways, which to me makes it a must. And with 400 million plus sports fans on Instagram, it’s a place where people are clearly coming to consume sports content and engage their favourite followers, so we see this as a great opportunity to give our partners even more tools to do that.”