Opinion | Was data the secret to DAZN’s successful pivot?

As the digital sports media specialist consolidates its key market offerings with major rights acquisitions, Alistair Taylor, a senior consultant at The Sports Consultancy, assesses the evolving approaches of the sport-centric OTT players.

The start of the year marked the beginning of ‘D-Day’ for sports rights as we entered the start of the next round of cycles for the largest sporting properties in the world.

For some time 2021 has been firmly in the crosshairs of major tech firms and streaming services looking to finally prise premium domestic rights away from traditional broadcasters.

Due to existing and legacy distribution relationships, sport is the last entertainment genre to truly come online and widely adopt streaming alternatives. Digital natives have slowly (but surely) migrated to streaming propositions in music, video, games and, now, lastly sports.

The problem before 2021 was that the majority of premium domestic rights have been held by incumbent pay-TV operators, such as Sky Sports and BT Sport in the UK. The previous cycle represented a testing period for digital players to dip their respective toes in sports as an engagement catalyst and gauge the interest from traditional fans. Consumers already faced a saturated marketplace in the peak attention economy era, with the emergence of streaming services only further fragmenting the market.

The obstacle therefore for sport-centric streaming operators has been to provide a compelling value proposition that entices consumers away from existing relationships in favour of their offerings. There were also teething issues for sports streaming services offerings, highlighted perhaps best by Eleven Sports' debut PGA Championship coverage in 2018, which was riddled with glitches and failed to show Brooks Koepka’s winning putt.

Proving to rights holders that an over-the-top (OTT) platform could handle a large concurrent streaming audience while minimising latency and maintaining a high picture quality was a seemingly impossible task for the early movers. Rights holders warned that without a reliable feed, premium packages were off the negotiation table, instead allowing only for digital experimentation with minor packages - such as Twitter's deal for the National Football League's (NFL) Thursday Night Football.

There have been several high-profile cases where streaming insurgents have failed to penetrate a market successfully and cement themselves as viable propositions. Eleven Sports' UK struggles were well documented, but the fundamental oversight has been often overlooked.

Ahead of its UK launch in August 2018, Eleven acquired the exclusive rights for La Liga and Serie A, the respective top-flight soccer leagues of Spain and Italy. Having nabbed the properties away from UK pay-TV's biggest names in sport, Sky and BT, Eleven positioned itself as the ‘go-to destination for soccer fans’. It also snapped up Dutch soccer's top-flight Eredivisie, Chinese Super League and the Allsvenskan, Sweden's elite tier.

Not only had the insurgent weakened its rivals' portfolios, but it also offered consumers premium foreign sports content without the need for a set top box, bundle package or annual contract. On paper, Eleven’s price point of UK£5.99 and ownership of premium foreign rights looked like a compelling proposition

So why did it fail? Some argue it was down to the streaming service’s inability to strike carriage partnerships with traditional broadcasters, leading to the breakdown of its Ultimate Fighting Championship (UFC) and IMG relationships. Eleven’s struggles were not solely due its failure to strike carriage partnerships with incumbent broadcasters, moreover its dependency on overseas properties to drive adoption.

In a highly saturated and competitive market, its soccer-heavy proposition devoid of premium domestic rights failed to resonate with the UK audience, resulting in a subscriber base which reached just 50,000. While these factors contributed to the eventual closure of Eleven’s UK division after less than a year in operation, the fundamental undoing was a lack of market understanding, with Eleven’s founder and chairman, Andrea Radrizzani, later saying that the UK launch was a "mistake".

Failing to comprehend the consumer preference for these foreign properties and gain an appreciation for the addressable audience led to Eleven’s overextension on the rights it acquired and a struggle to recoup those investments via its subscription model.

To succeed, Eleven needed to become a substitutive service, able to convince subscribers to cut ties with traditional pay-TV operators in favour of its platform. Without Premier League rights Eleven was merely an additive service and its diminished value proposition failed to compete in the UK media market.

UK-based digital sports media specialist DAZN has acknowledged the importance of owning premium domestic rights to increase the probability of market penetration. It appears to have learnt from early struggles in the US, where it failed to drive sufficient adoption without offering premium domestic content.

Having grown its portfolio for premium international and domestic sporting rights in its key markets, DAZN is now transitioning from a disruptor into an established service. Two years ago DAZN’s leading market was Japan, which accounted for US$243 million, or 40 per cent, of overall revenue. Its Japanese operation amassed 1.8 million subscribers in 2019, 22 per cent of its global base, with that success largely attributed to its long-term domestic rights deal with domestic soccer's top-flight J.League.

DAZN’s strategic pivot to target premium domestic rights was none more clear than when it secured the Uefa Champions League rights in Germany from the start of the 2021/22 season, paying around €315 million (US$386 million) a year for 121 games per season. This coup significantly upgraded its German market value proposition, which it later bolstered by upping its annual coverage of domestic soccer's elite Bundesliga from 40 to 106 matches per year from the start of next season.

Whether or not DAZN utilised consumer research and good data ahead of these strategic investments, learning from previous struggles and understanding consumer preferences will provide actionable insights, allowing for implementation of smarter business solutions. 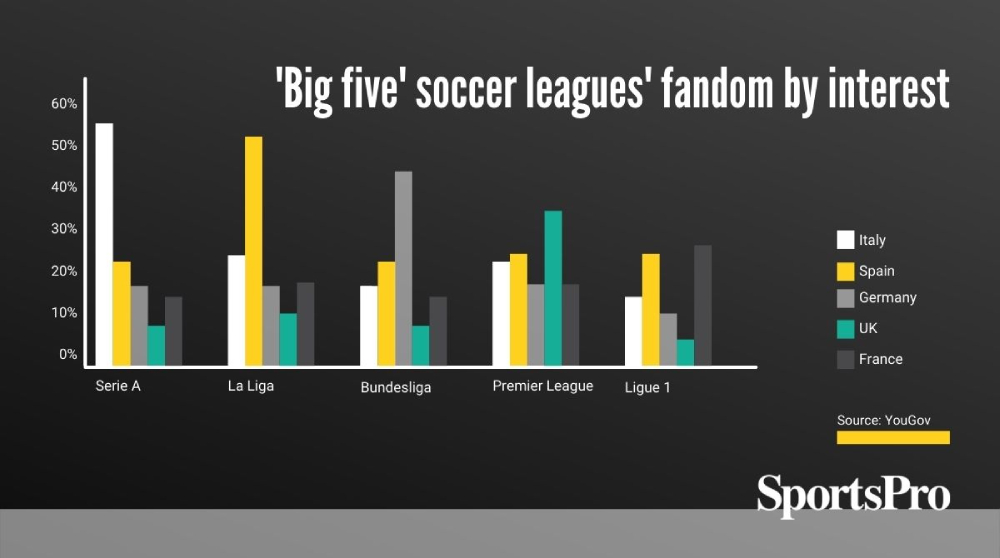 DAZN has also consolidated its Italian offering. Having already tested the water for a minor domestic package for Italian Serie A rights in 2018, DAZN has now become the league's lead broadcaster for the next three seasons.

The successful €2.5 billion (US$2.95 billion) acquisition evolves its platform into the primary destination for Serie A fans. From August, DAZN will provide subscribers with all ten matches per game week, with 266 Serie A matches exclusively broadcast on the streaming service, and a further 114 co-exclusive matches per season. Continuing with its current Italian distribution strategy DAZN will not only make the matches available on its OTT platform, but also via its dedicated carriage partnerships with TIM and Vodafone.

The data supports DAZN’s decision to target domestic rights in Italy, given the audience’s over-indexing for support of their home league. Compared to the other major European soccer properties, Italy is home to the most engaged audience, with 54 per cent fandom for Serie A.

Further evidence of Serie A’s importance to distributors is evident in the downturn of Italian broadcaster Mediaset, whose Mediaset Premium OTT platform reportedly lost 1.2 million subscribers after it failed to secure the domestic rights to Serie A in 2019.

Had Eleven Sports analysed the UK’s interest in overseas properties ahead of its market launch it may have reconsidered its strategy. The UK has the lowest interest in soccer compared to the other leading European markets. Interest in La Liga ranks second behind the Premier League for UK audiences, but with only nine per cent of fandom - highlighting the poor consumer adoption Eleven realised.

As  industry expert and SportsPro columnist Giles Morgan said: "Knowing your fanbase is the true currency of value in the sports industry – for fans, investors, sponsors and media."

The pandemic exposed the need for rights holders to throw out the legacy approach to strategic decision making, instead it must leverage consumer insights and industry trends to optimise the value of sponsorship, broadcast and hosting rights revenues.

Too many rights holders have failed to capture detailed data on their fans, and those that have are simply sitting on a vast well of unused and unrefined data. In December 2020, The Sports Consultancy (TSC) along with Texas-based data firm Pumpjack Dataworks launched the Commercial Intelligence Service (CIS). CIS enables organisations to convert better knowledge and understanding of the fanbase into commercial outcomes, to help rights holders navigate strategic and commercial challenges in a rapidly evolving landscape.

As Clive Humby said: "Data is the new oil, but unrefined it cannot really be used. It has to be refined to create a valuable entity that drives profitable activity."