The sports industry has needed a decisive, far-reaching response to the Covid-19 pandemic but as a new report underlines, it will need to apply that approach again to address another looming threat.

A crisis can have a powerful effect on your perspective.

Like, remember when the most dramatic news in the world was that half a continent was on fire?

The harrowing events of recent months have pushed the sports industry into survival mode, responding with the rest of society to the imminent threat of Covid-19. That calamity is still unfolding, still worsening in some places, and we will be working around the effects of it for some time.

That might mean a necessary reversion to the short-term baseline for the time being but other dangers will be waiting on the other side. Of all the biggest risks to human health and prosperity that you might have outlined at the start of 2020, some, like a pandemic, are episodic: they flare up, you fight them and, all being well, you beat them. But one in particular is a gathering storm – a problem that only gets worse the longer it is overlooked.

The bushfires that swept across Australia in the early weeks of this year provided some of the starkest, most vivid illustrations to date of the effects of climate change, and the reality of accelerated, exacerbated weather patterns. They also brought home just how much extreme conditions are going to affect daily life, as smoke drifted across major Australian cities. Players at tennis’ Australian Open in Melbourne struggled badly, with Dalila Jakupovic coughing her way out of the qualifying competition, but events across the country were heavily affected.

Distressing scenes in the Australian Open qualifiers in Melbourne as Dalila Jakupovic is forced to retire when bushfire smoke brings on a coughing fit pic.twitter.com/3IiDVHXMVx

And sport had better get used to it. That, anyway, is a central premise to a report published in the last few days by the Rapid Transition Alliance. ‘Playing Against the Clock: Global Sport, the Climate Emergency and the Case for Rapid Change’ is a comprehensive overview of the relationship between sport and climate change, considering the industry’s vulnerabilities – of which there are many – and its responses – which are still somewhat limited.

Taking the latter part of that equation first, one of the report’s more significant practical observations is that comparatively little research has been done to measure just what sport’s impact is on the environment. Some form of carbon counting has been done, it notes, for certain headline events like the Olympics, Fifa World Cup and Uefa European Championship, as well as a smattering of other leagues and competitions, but the practice is not as widespread as it might need to be.

Not much information exists yet, either, on the carbon footprint created by other activities like broadcasting and sportswear manufacture, or by related travel and digital consumption. Based on what he admits to be ‘a lot of assumptions, guesses and estimates’, author David Goldblatt generated a ballpark estimate for sport’s global carbon emissions of over 30 million tonnes, or an output approaching that of Denmark.

Once ancillary emissions from sport’s contact with other industries are factored in, that figure could be much higher. Working on the basis of the Business Research Company’s calculation that the sports industry represents 0.6 per cent of the global economy, Goldblatt suggests it could be a considerable underestimate.

What is easier to count is the number of signatories to the UN Sport for Climate Action Framework, who include heavyweight bodies like the IOC, Fifa and the NFL but only about a dozen or so of the leading global governing bodies and a patchwork of teams, national leagues and associations. Some organisations, such as Formula One, have committed publicly to ambitious carbon reduction programmes but while the report points to detailed climate emergency planning from the likes of World Athletics, those are outnumbered by bodies who have barely addressed the issue at all.

A new report from @Davidsgoldblatt provides the first provisional estimate of the impact of global sport on the climate and warns that the #ClimateEmergency will have severe consequences for several sports.https://t.co/rCQdJcky5X pic.twitter.com/5uCZHTXUX2

Goldblatt is an academic and sports historian whose work includes landmark texts on soccer, The Ball is Round and The Game of Our Lives, which chart not just its rise but its intrinsic links to wider society. So it is probably not too surprising that he sees a social imperative in a well-organised response to the climate emergency, and he argues that sport’s cultural importance and accessibility would lend greater weight to that response than its small share of carbon emissions would suggest.

Of course, the industry is not just going to be stirred into action out of a sense of civic responsibility. Goldblatt’s report also presents some very real indicators of how severely and directly climate change might affect sport. He cites predictions by researchers at Canada’s University of Waterloo that only ten of the 19 former hosts of the Winter Olympics will be viable winter sports venues by 2050, and only six by 2080.

He also highlights a succession of events in the past few years hampered by adverse weather, most notably droughts and extreme heat – the increasing number of temperature-related stoppages at the Australian and US Open tennis, or the decision to move the Olympic marathon 1,000km north of Tokyo to Sapporo. A 60 per cent rise in the incidences of 40°C days in Australia is likely to lead to changes in the cricketing calendar by 2030; the traditional Boxing Day Test in Melbourne could be pushed to a cooler part of the year by high summer maximums of 50°C.

The effects of climate change, like so many other disasters, will fall more heavily on already at-risk groups: impoverished regions, countries whose infrastructure is less adaptable, those unfortunate enough to be in the way. In sport, they may be felt more strongly by snow and water-borne disciplines and those like golf which are held out in the elements. Yet the implications will be far-reaching.

According to the report, 23 of the 92 English soccer clubs currently playing in the Premier League and Football League can expect partial or total annual flooding of their grounds by 2050 if current trends continue. The American Airlines Arena, home of the NBA’s Miami Heat, would be partly flooded every year, while the New York Giants and New York Jets of the NFL would need to plan around a total flooding of the MetLife Stadium. 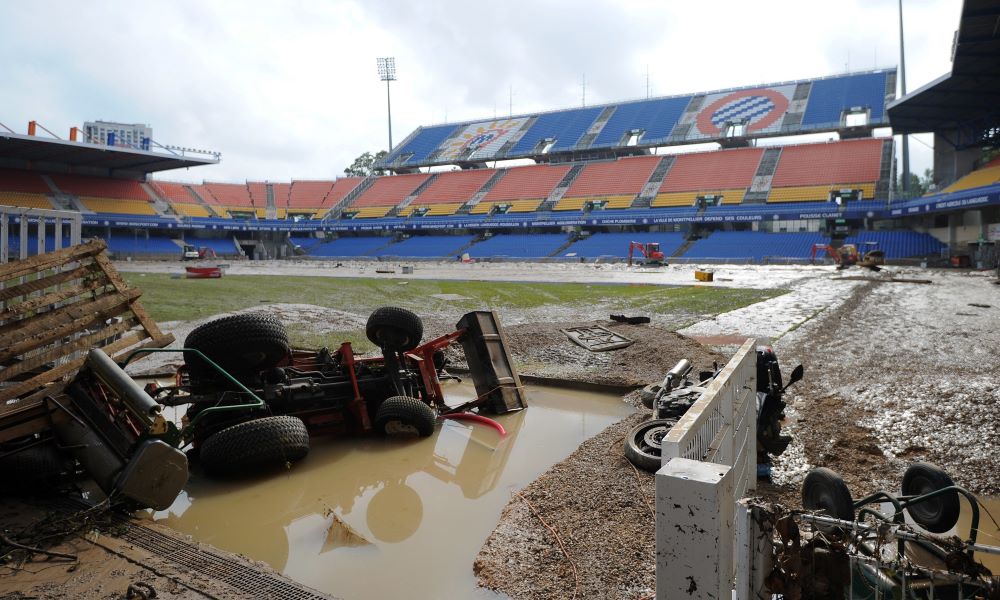 The flooded Mosson stadium in Montpellier, France in 2014

In other words, one way or another, sport is going to have to prepare for lasting change. This industry’s immediate priority might be getting through the next 18 months but what follows will demand a similar appetite for radical thinking. There may be no bubble big enough for cover from the next challenge, however hard some parties will try to design it.

That leaves real commitment as the only viable reaction. Goldblatt’s report calls for a particularly aggressive approach. It recommends that all rights holders sign up to the UN Sport for Climate Action Framework and, within 12 months of doing so, draw up targeted, catalogued ten-year plans to run carbon-zero sports by 2030.

Events that cannot be carbon zero by that date, it says, should be cancelled, and organisations that cannot meet sustainability targets should be isolated and removed. The same standards should be applied to partners and suppliers. Schedules should be reorganised, local events prioritised, renewable energy incorporated at every opportunity. There should be no normal sport, Goldblatt writes, in abnormal times.

Whether organised sport is ready for that bold a demand, or would prefer a careful reassembly of the old order, is a question with a long answer. Still, for better or worse, we know now about the extent of what is possible – 2020 has delivered what the report calls ‘a masterclass in the dynamics of catastrophe’.

It will make for another searching challenge. The sports industry has enjoyed continued growth for a good couple of decades now; innovation and new ideas have often been employed in preserving that good fortune, rather than solving problems. This year, instead, it has exercised a creativity and flexibility that had often gone underused. Those muscles will be needed again before too long.

There is another problem to solve. This time, at least, there is some notice of what is to come.